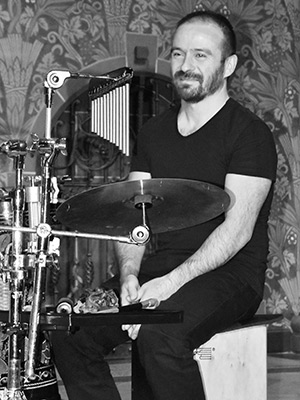 Born in Gelsenkirchen, Fethi Ak started playing Darbuka at Turkish weddings as a child. Now, he is one of the most accomplished Darbuka players in Germany and is in great demand in the Turkish, Kurdish and world music scene, for studio recordings as well as concerts. In 2017, he won the WDR Jazz Prize with the Transorient Orchestra. He has won the World Music Competition "Creole" twice. "I travel with intercultural formations a lot, but what I like most about AVRAM is the interplay of religions. But most important for me are the super nice people in the ensemble!”