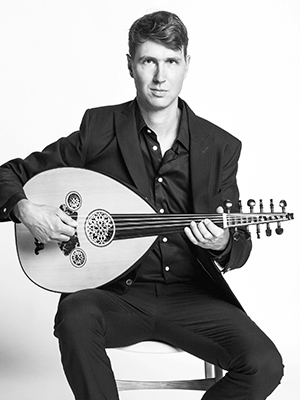 Mathias Kurth studied the classical guitar during his childhood, during his youth he played in diverse rock bands and finally studied jazz guitar at the ArtEZ Conservatory in Arnheim/Netherlands.

He is mostly associated as a guitarist in the areas of jazz and improvised music with Lautstark!4 as well as in short film live music. His concerts have taken him to many parts of the world from Europe to Taiwan and India. Currently he is playing in various world music projects and is studying the Arabic short-necked oud. His interest in oriental music and the oud resulted from his work with Arabian musicians.